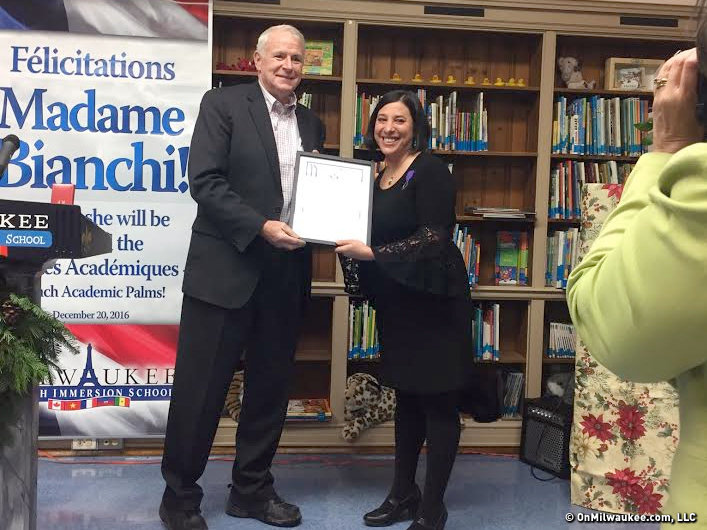 OnMilwaukee.com: On Tuesday night, Milwaukee French Immersion School Principal Gina Bianchi was honored for her work at this MPS school – which exceeds expectations according to its most recent DPI report card – by the French government.

At a ceremony at the school – located in the former Steuben Junior High at 2360 N. 52nd St. – Bianchi was presented with the Chevalier dans l’Ordre des Palmes Academiques (Knight in the Order of the Academic Palms) Tuesday by the French Consulate Denis Quenelle – on behalf of French national education minister Najat Vallaud-Belkacem – during the school’s winter concert.

Bianchi has been principal at the school – where she got her start as a teacher – for three years. MFIS was established in 1978 and has been located in a few buildings since. It is the state’s only French immersion school.

According to MPS, The Palmes Academiques is a national order of France for distinguished academic figures in the world of culture and education. The order was established in 1808 by Emperor Napoleon. Bianchi was nominated by Anne Leplae, executive director of Alliance Francaise de Milwaukee, who also is a recipient of the award.

“(Ms. Bianchi’s) passion for French language and culture as well as for teaching is evident as soon as you meet her,” wrote Leplae in her nomination letter.