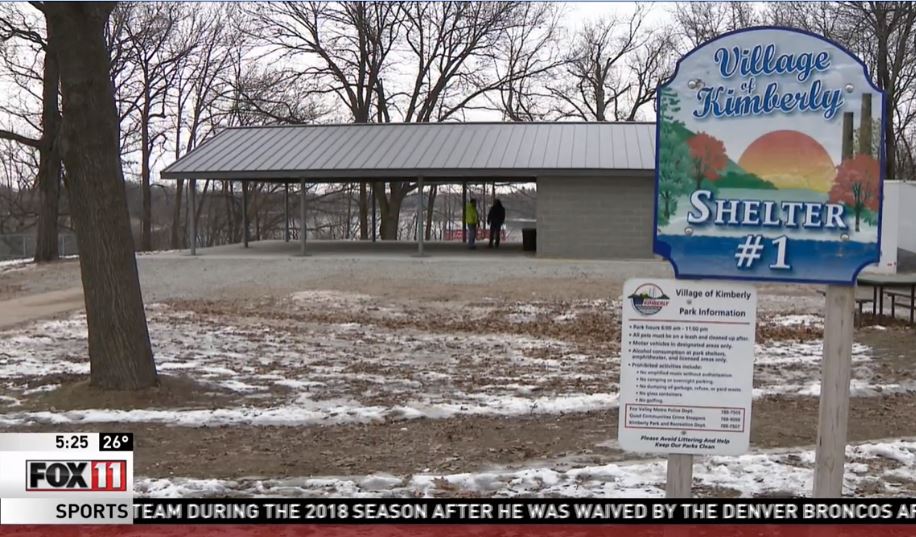 Visitors to Sunset Park in Kimberly will have a new place to gather. A rebuilt Shelter Number One was dedicated Thursday, and students from Kimberly High School were the ones who did the work.

“It’s kind of an iconic spot in Kimberly. With the scenic outlook and the proximity to the river. So, to have this structure here for the community to use, is an honor,” said Holly Femal, Village of Kimberly Community Enrichment Director.

Femal says the Village of Kimberly bought the materials, and students from the high school’s building construction class spent several months building a brand new shelter at Sunset Park. The students worked alongside local construction professionals, like concrete workers, and welders, in order to learn from the experts in the field. That includes the architects too.

Senior Mackenzie Beck designed the shelter, with some guidance from a local company. “It was overwhelming at first. But it ended up being really cool and exciting,” Beck said. 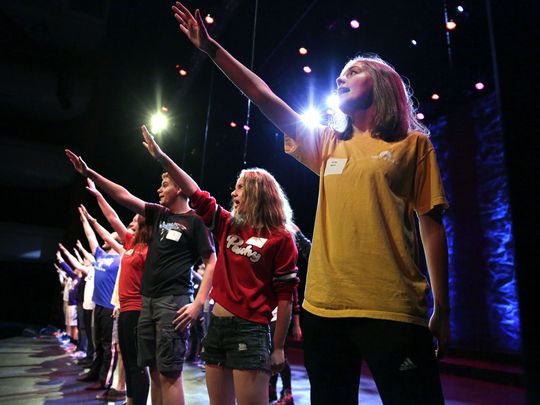 They will take part in intensive coaching and rehearsals before performing at the 25th annual show at the Minskoff Theatre. A panel of judges will then choose an actor and an actress to bestow with a Jimmy Award as the nation’s top performers. 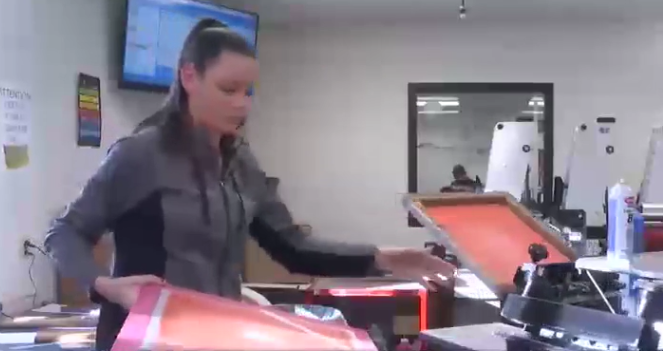 WBAY.com: The number of high school students getting real-life, hands-on work experience is growing rapidly. That’s because state funding for youth apprenticeship programs has more than doubled since 2010.

Gov. Scott Walker was at Kimberly High School on Friday to see firsthand the success of these programs.

The governor says now more than ever, these youth apprenticeship programs are important to Wisconsin as the state is seeing some of its lowest unemployment in years. Companies of all kinds are looking to add employees.

The youth apprenticeship program at Kimberly High School is thriving and growing. In 2014, 22 students participated in the program. Last year’s graduating class had more than 100 students take part in it.

Students are gaining experience in careers like agriculture, transportation, hospitality, finance and manufacturing.

The governor told students their participation is not only a lesson for them but is beneficial for the state and businesses.

“We want both student success, but we also want student success that leads to a strong and vibrant workforce going forward, which is good not just for employers, it’s good for all of you. Because in the end what you want is not just a job, hopefully what you want is a career — a career that you’ll enjoy, a career that can someday support not just yourself but, if you choose to, have a family. And that will make for a stronger community and in turn a stronger state,” Gov. Walker said. 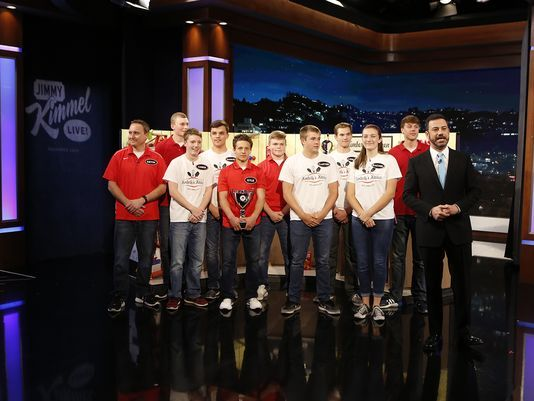 The team showed its “Kimberly Kitchen” machine on the “Jimmy Kimmel LIVE!” show. A video of the show can be viewed at https://goo.gl/EHTVi9.

The team was invited to Hollywood to speak about their kitchen-themed Rube Goldberg Machine that completes a simple task through an overly complicated and creative process. This year’s challenge was to apply a Band-Aid. Their machine completes that task in about 70 steps. 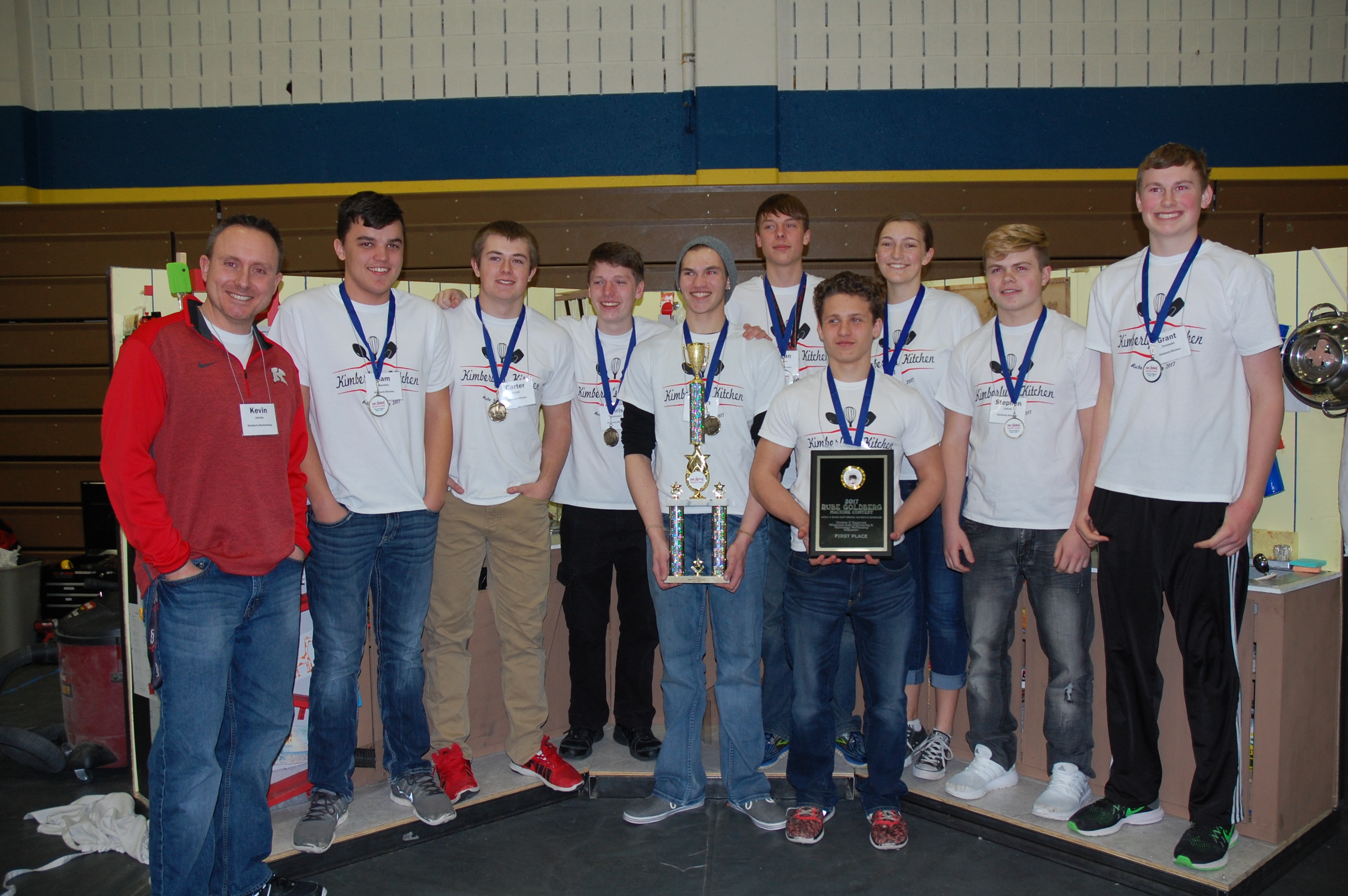 It features all the equipment one would expect a kitchen to have: a stand mixer, spatulas, a tea kettle, a toaster, a cheese grater and measuring cups.

But this is no ordinary kitchen.

It’s the Rube Goldberg Machine the aptly-named Kimberly Kitchen Team will take to the national competition in Columbus, Ohio on Saturday.

“We just need to take simple, everyday objects and try to make complex tasks out of it,” said junior Chris Thompson.

The simple task of applying a Band-Aid takes the Kimberly Kitchen contraption 69 steps to complete. Students enroll in the Rube Goldberg Machine Class at the high school, split up into teams and create their masterpieces.

They will compete against 16 other teams from around the nation on Saturday.

Kimberly High School is no stranger to the national Rube Goldberg Machine Competition. A group of Papermakers won it all in 2012 and another took third in the nation in 2013, Janota said.

The team is more excited than nervous for the experience.

“I’m excited because I’ve never gone to nationals for something,” Thompson said. “It’ll be a fun experience where we can show everyone what we can do.”

Times-Villager: The Kimberly football team has been beyond impressive on the field.

The Papermakers haven’t lost a game in three seasons, compiling a 42-0 record since 2013. They won their third consecutive state championship in dramatic fashion in November, coming back from 21 points down in the second half to beat Arrowhead in the final minutes.

But what may be perhaps even more impressive than the team’s on-field exploits is what the players have done off the field. Along with 42 straight wins, the Papermakers have put together a collective team GPA over 3.5 the past three seasons.

For the first time ever this year, the Wisconsin Football Coaches Association has awarded academic all-state honors, and just like they’ve done on the field, the Makers have proven themselves the best team in the state. Ten Kimberly seniors were named academic allstate with a GPA of over 3.75, more than any other team in any division in Wisconsin.

Tables filled half of the fieldhouse with volunteers stationed at each one. They helped students decide how to spend their fictional income — on cars, houses, pets, recreation and more.

Students chose their career, but little else before the exercise began. They drew numbers to find out if they had a spouse and what their spouse did for a living. Children were randomly assigned.

Post-Crescent Media tagged along with Taylor Paschen, a sophomore, as she made her way through the Reality Store last week.

Paschen worked as a marketing manager. Her husband was an air conditioning technician. They did not have any children.

She used that information to form a strategy before she entered the gym.

“I’m trying to save as much money as I can because I know there are a lot of things that come up,” she said.

The students had to visit every station.

No real-world expenses were forgotten. Students had to pay taxes, buy vehicles and houses, purchase insurance, get child care, decide whether to have pets and choose whether to go out to eat or to the movies. A police officer walked around doling out tickets for loitering. They had to go to court and pay fines or sit in jail.

On his seventh birthday, Tayo Sanders II received a microscope.

He recalls feeling cheated the first time he looked through it because his own senses wouldn’t allow him to explore “this extraordinary and foreign world.” But as he examined everything that fit under the scope, dismay turned to wonder. And that wonder “tied the knot” in his love affair with science.

This week, Sanders, a graduate of Kimberly High School, took his place at Oxford University in the United Kingdom, a Rhodes Scholar from the University of Wisconsin-Eau Claire.