The Shawano Leader: A group of Clintonville Middle School students were recently named as finalists in a nationwide challenge hosted by a student publishing company. Stacey Conradt and her sixth-grade class were among the top 50 student-published contestants out of more than 800,000 entries in Studentreasures Publishing’s 2017-18 National Book Challenge.

“I am extremely proud of the hard work and creativity that each student put into this authentic piece of literature,” said Conradt, who will be starting her fifth year of teaching in the Clintonville School District. She said the 16 student-authors in her class worked together to write “The Adventures of Jerky Turkey,” an idea they came up with when thinking about a turkey’s perspective on Thanksgiving. The students worked together to research, write and illustrate the book before sending the completed pages to be published.

“They worked together as a team to come up with the idea and carry out the story’s plot throughout the entire book. Each student shared personal ideas and traditions of their Thanksgiving experiences which, in my opinion, created a very entertaining story line,” Conradt said. “I’m very proud of the Clintonville Middle School student authors and hope they remember this achievement forever.”

They will take part in intensive coaching and rehearsals before performing at the 25th annual show at the Minskoff Theatre. A panel of judges will then choose an actor and an actress to bestow with a Jimmy Award as the nation’s top performers.

WBAY.com: The number of high school students getting real-life, hands-on work experience is growing rapidly. That’s because state funding for youth apprenticeship programs has more than doubled since 2010.

Gov. Scott Walker was at Kimberly High School on Friday to see firsthand the success of these programs.

The governor says now more than ever, these youth apprenticeship programs are important to Wisconsin as the state is seeing some of its lowest unemployment in years. Companies of all kinds are looking to add employees.

The youth apprenticeship program at Kimberly High School is thriving and growing. In 2014, 22 students participated in the program. Last year’s graduating class had more than 100 students take part in it.

Students are gaining experience in careers like agriculture, transportation, hospitality, finance and manufacturing.

The governor told students their participation is not only a lesson for them but is beneficial for the state and businesses.

“We want both student success, but we also want student success that leads to a strong and vibrant workforce going forward, which is good not just for employers, it’s good for all of you. Because in the end what you want is not just a job, hopefully what you want is a career — a career that you’ll enjoy, a career that can someday support not just yourself but, if you choose to, have a family. And that will make for a stronger community and in turn a stronger state,” Gov. Walker said. 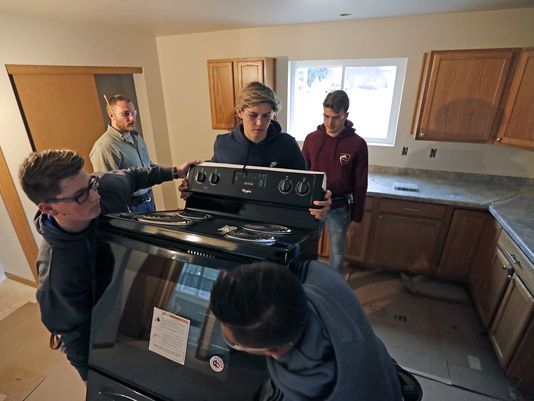 Post-Crescent: An unfinished house has been a classroom for a group of Appleton high school students for the past few months.

But in about a month, a local family in need of a place to live will be moving in.

The house was built by 22 students, mostly juniors and seniors from all three Appleton high schools who worked at the site on South Pierce Avenue for a two-hour, two-credit class this past semester as part of the school district’s partnership with Habitat for Humanity.

Marcus McGuire, a teacher at Appleton West who runs the class, said he was glad students were involved in the project because the experience could help them find careers in construction.

The students took part in the build every step of the way, McGuire said, and worked directly with contractors to do more specialized work, such as plumbing or wiring.

“My goal is to mimic an actual job site as much as possible,” he said.

Read the complete article on student Habitat for Humanity project.

Post-Crescent: It used to be that only very large employers could afford to offer the “perks” of a dedicated employee health clinic. However, programming by Greg Biese of Associated Benefits and Risk Consulting and ThedaCare At Work broke with tradition last fall. They worked together to establish a shared clinic specifically for eligible employees and families of the Appleton Area School District and the City of Appleton.

The near-site clinic, a term that describes a mutually convenient location for partner-employers but is not actually on-site at any one of their workplaces, is housed on the campus of ThedaCare Regional Medical Center-Appleton.

The staff at the Connecting Care Clinic, as it is called, includes a nurse practitioner, physician assistant, registered nurse, and two medical assistants. Hours are set to coincide with the schedules of school district and city employees, including two days a week when the clinic opens at 5:30 a.m. for shift and school-day staffers.

Julie King, chief human resources officer for AASD, and Sandy Matz, director of human resources for the City of Appleton, both worked with Biese and ThedaCare At Work to develop the custom clinic format.

Waupaca County News: One committee got a first-hand look and later an in-depth explanation about a new program the Manawa School District hopes to launch.

At its Wednesday, July 26 meeting, the Buildings and Grounds Committee spent part of its time at 407 S. Bridge St.

“If I could have dreamt up the type of space that would work, this would be it,” said Danni Brauer, director of special education and curriculum for Manawa schools.

The district would like to start a Practical Assessment Exploration System (PAES). The downtown location would serve as the PAES lab, or hub for the program.

Brauer’s department has the goal to ensure that 100 percent of students leave with either a full-time, competitive paying job or a post-secondary education path.

The PAES lab would be for those students with individualized learning plans, meaning those with a variety of disabilities that affect learning.

“The kids I’m talking about are some of the hardest to employ,” Brauer said.

The downtown location would provide an atmosphere free of distractions like bells, so students who participate can focus on life after school.

“We have a very needy population of kids who need this training and we have some that just aren’t motivated,” Brauer said.

Waupaca County News: A climbing wall at the Iola-Scandinavia Community Fitness & Aquatic Center has been turned into a learning experience for students of all ages.

“The last two years, we had introduced the climbing wall in physical education classes at all levels of the school district,” center director Tim Welch said.

It only seemed natural to add it to the summer school curriculum and Welch said it has been a big hit.

“Climbing is called a Challenge by Choice activity,” he said. “This means students make their own choices how far and high to climb. This way, climbing becomes an individual fun activity not based on fear, but based on what they can do physically and what they feel comfortable doing.”

“It’s much harder than I thought, but I like the challenge,” third-grader Korz Loken said. “Everyone should give it a try. It’s something new and fun to do.”

“I finally made it to the top,” added Jayden Ridge, 7.

The team showed its “Kimberly Kitchen” machine on the “Jimmy Kimmel LIVE!” show. A video of the show can be viewed at https://goo.gl/EHTVi9.

The team was invited to Hollywood to speak about their kitchen-themed Rube Goldberg Machine that completes a simple task through an overly complicated and creative process. This year’s challenge was to apply a Band-Aid. Their machine completes that task in about 70 steps.

It features all the equipment one would expect a kitchen to have: a stand mixer, spatulas, a tea kettle, a toaster, a cheese grater and measuring cups.

But this is no ordinary kitchen.

It’s the Rube Goldberg Machine the aptly-named Kimberly Kitchen Team will take to the national competition in Columbus, Ohio on Saturday.

“We just need to take simple, everyday objects and try to make complex tasks out of it,” said junior Chris Thompson.

The simple task of applying a Band-Aid takes the Kimberly Kitchen contraption 69 steps to complete. Students enroll in the Rube Goldberg Machine Class at the high school, split up into teams and create their masterpieces.

They will compete against 16 other teams from around the nation on Saturday.

Kimberly High School is no stranger to the national Rube Goldberg Machine Competition. A group of Papermakers won it all in 2012 and another took third in the nation in 2013, Janota said.

The team is more excited than nervous for the experience.

“I’m excited because I’ve never gone to nationals for something,” Thompson said. “It’ll be a fun experience where we can show everyone what we can do.”

Fox 11 News: Some Oshkosh North high school students got an early glimpse into some potential careers.

“This really gave students exposure to all aspects of business,” said Julie Mosher with the Oshkosh School District.

During this year long project, called Project GRILL, the manufacturing and welding class teamed up with Oshkosh Corporation.

“They have really enjoyed being a part of working with Oshkosh Corporation and the executives, the engineers there” said Patti Andresen-Shew with the Oshkosh Chamber of Commerce, “They felt like they learned a lot, it’s been a real growth experience.”